Finding Drake Novak is a dark comedy about a renegade alien who draws his nourishment from the pain and suffering of other living things. On the run from the Galactic Police, Drake Novak comes to Earth and takes over a plastic factory in a small town in Georgia. He makes every job as difficult as possible so the workers live in endless frustration. He stands at the observation window in his office and stares down at all of them, absorbing their pain the way a plant absorbs sunlight.

A young man named Malpheus Mallock, a rookie officer from the Galactic Precinct, travels to Earth to arrest Drake Novak. But Malpheus has a problem. His tracking device doesn’t work correctly. Malpheus lands in the front yard of an elderly couple named Carl and Christine. They introduce Malpheus to fried chicken, sweet tea, and Atlanta Braves baseball — but he desperately wants to fix his tracking device so he can find and capture Drake Novak.

Finding Drake Novak is available in paperback and e-book on Amazon. 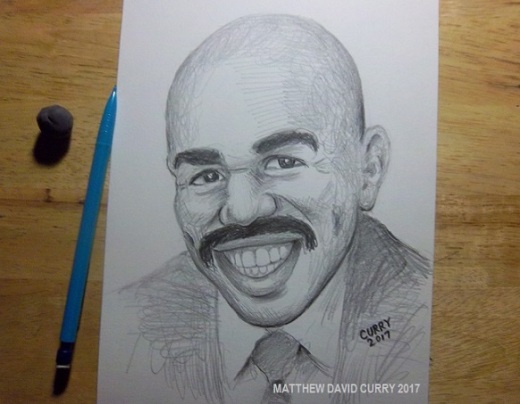 I drew Steve Harvey late last night while I was drinking Monster and listening to a Christmas record.

I went to the dentist today to get some fillings. Then I ate lunch at Krystal. Before the novocaine wore off. I didn’t know I had bitten a hole in my lip until I looked down and saw blood on my cheeseburger. It’s been a rough, messy, awkward day. But the new fillings are really nice.